Once dubbed ‘The Poster Boy of Grime’, Novelist (real name Kojo Kankam) has gone from strength to strength while developing his reputation as a respected MC.

After years of local shows at youth clubs and MC freestyles on YouTube, Nov soon found his way onto radio stations such as Flex FM, Rinse FM and Reprezent which allowed him the platform to reach a wider audience and develop his fan base. At the age of 17, Novelist went on his first tour outside of the UK and was also nominated for a MOBO Award in the Best Act of Grime category; it was then that his status as a serious contender was solidified!

With no let-up in pace, Nov had teamed up with producer Mumdance and put out his first EP under the XL label. It was an exciting hybrid as Mumdance is an established Electro producer and this was the first crossover collaboration of its kind. The successful duo was to go on to perform the tracks on the EP at the world-famous Barbican Centre.

"Novelist" was now firmly on the radar and earmarked as an emerging artist to look out for when chosen to be on the BBC’s Sounds Of 2015 list. Still aged just 17, Novelist was invited to feature on a track with Chase and Status and together they gave us the famous track Bigger Man Sound.

At 18, Novelist featured on veteran Grime artist Skepta’s award-winning Konichiwa album. The two co-wrote the track titled Lyrics and it proved to be a perfect marriage of styles.

By now Novelist had some years of performing at festivals under his belt, but when he was asked to play at Glastonbury, this was an essential milestone in his journey to establishing his name. He not only performed with Skepta, but he also played his own stage and gave an energy filled, electric performance loved by the crowd!

Novelist along with Mumdance supported Major Lazer on tour in the UK, ending the tour with an energy filled performance at London’s Alexandra Palace. His first Australia / New Zealand tour at age 18 was a roaring success and his second by age 20 saw the exponential growth of his fan base with fans chanting his lyrics verbatim. In more recent times, Nov has focused more on developing himself as a standalone artist, choosing to do fewer collaborations, but not before giving us another crossover track produced by Tom Misch. The song Physical demonstrated another dimension to Nov’s extensive breadth as an artist. His last collaboration was with emerging producer JD. Reid on a track titled Ready which was more reflective of Nov’s grime centric beginnings.

The 2017 Jagermeister Music Awards was Novelist's first performance in Russia. His participation lead to an extensive write up in the world-famous Rolling Stone Magazine (Russian edition). 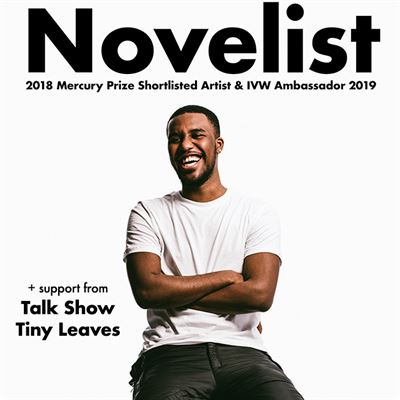