Jumbo are VERY proud to be part of Scalarama Leeds Film Festival 2018, a DIY celebration of cinema that happens for the whole month of September! This will be second time we've done a special shop screening as part of Scalarama so we're very excited about this one! Be quick though as the film is a cracker and we expect it to sell out fast...

The record label Chemikal Underground was created by members of The Delgados and was at the centre of the thriving music scene in Glasgow in the mid-90s. Lost in France goes on a journey with Alex Kapranos (Franz Ferdinand), Stuart Braithwaite (Mogwai), R.M. Hubbert a.k.a Hubby, Stewart Henderson, Emma Pollock and Paul Savage (The Delgados) as they re-stage a gig in the same place in France where they all played at a chaotic festival early on in their careers. The documentary features music performances, interviews and archive footage. A special film with lots of heart that makes you feel like you're part of the Chemikal Undergound gang. It shows the power of friendship and connections, community and music. 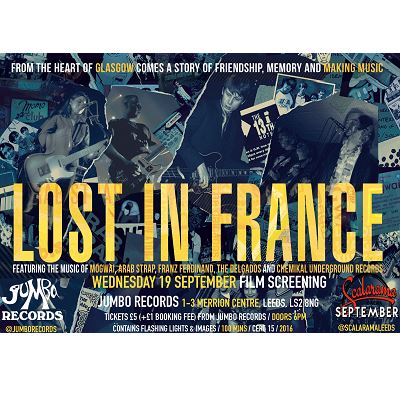